Hundreds of Colombians waded across a border river with fridges, chickens and mattresses on their backs as goats and children followed under the scorching tropical sun, victims of an escalating dispute with Venezuela's government.

Saying they were forced from their rickety wooden or corrugated metal homes and scared of what might happen next if they stayed inside Venezuela, they fled across the River Tachira and back into their homeland on Tuesday.

"I feel impotent. I want to cry. I lost everything overnight," Darwin Arenas, a 26-year-old Colombian, said as he and his Venezuelan wife dragged their possessions across the river in a wheelbarrow.

Most of the refugees have lived for years in Ernesto Guevara, an extremely poor Venezuelan border village, or other nearby settlements, but they were forced to leave after Venezuelan authorities marked their homes with a "D" for "demolition" over the weekend.

Venezuela says it is cracking down on paramilitary and smuggling gangs active along the border but the families fleeing said they had nothing to do with crime.

Some like Arenas, a supermarket worker with two children, were formally deported by Venezuela. Others said that National Guard officers ordered them to get out, and others decided to leave before the border crisis gets worse.

Venezuelan President Nicolas Maduro has blamed many of recession-hit Venezuela's problems on Colombians, sparking a spat between the two South American neighbors who share a long and porous border plagued by drug trafficking, paramilitaries, left-wing guerrillas and smugglers.

Maduro last week closed an official border crossing near here and suspended some constitutional guarantees along parts of the border, allowing authorities the right to search homes and businesses without a warrant, after Venezuelan soldiers were injured in a firefight with smugglers.

Across the river on Colombian soil, authorities are helping the distraught families find refuge. Many have no idea where they are going and on Tuesday they milled around aimlessly alongside their possessions on a muddy river bank.

Colombia's disaster relief agency said it was sending 500 emergency aid kits as well as tents and diapers to the town of Cucuta on the Colombian side of the border.

Maduro says he is only interested in forcing out smugglers and paramilitaries and insists that human rights will be upheld. The Colombian government, however, says more than 1,000 people have been unfairly deported.

"Flattening houses, using force against people, separating families, not allowing them to take their few possessions and marking the houses for demolition is totally unacceptable and is a reminder of bitter episodes of humanity that can not be repeated," President Juan Manuel Santos said on Tuesday. 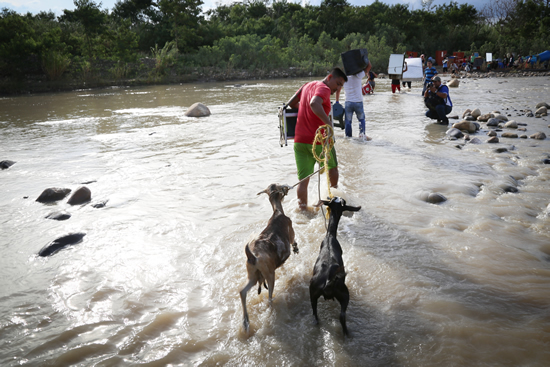 Dozens of residents in Ernesto Guevara, named for the Argentine revolutionary better known as "Che" Guevara, said National Guard troops came over the weekend and went through every single home, looking for Colombians.

They labeled many houses with a giant "D" for "demolition", the residents said, adding that the National Guard proceeded to damage homes and steal some possessions.

"The National Guard came and said we had 72 hours to get out and they would demolish our house," said Colombian Luz Nelsi, a 36-year-old single mother whose wooden house is painted with a giant "D."

"Do we look like paramilitaries?" said Nelsi as she and her three young daughters stood at the door. 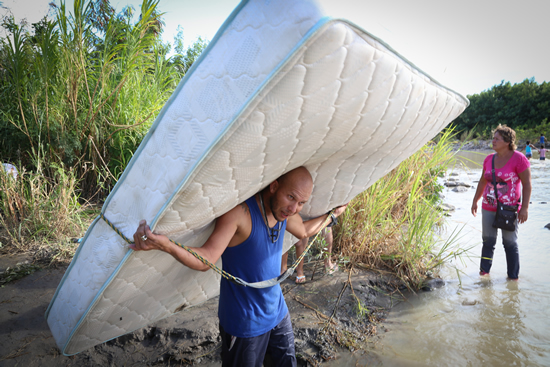 Venezuela says it is acting only to protect Venezuela and that it has respected the Colombians' rights.

"We haven't violated a single human right. We haven't flattened a single house" said Jose Vielma, the governor of Tachira state, during a special National Assembly session in the western part of Venezuela on Tuesday.

Venezuelan authorities did not respond to requests for comment on this article.

Many Venezuelans have coexisted with the country's large Colombian community for decades and are shocked by the border crisis. Housewife Maria Velazco, 47, helped Colombian friends living in Ernesto Guevara pack up their things.

"This is like when the Jews' houses were marked with stars in Germany," she said outside the friends' house as those around her frantically packed up what they could. 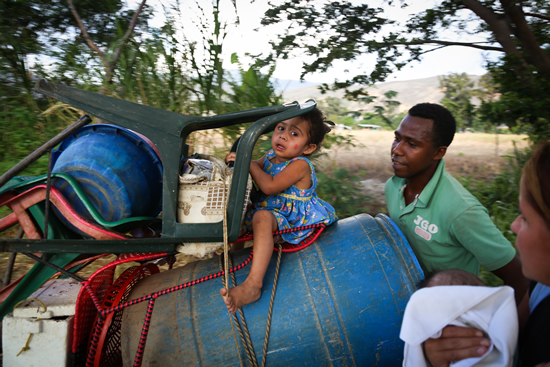 Additional reporting by Julia Symmes Cobb and Monica Garcia in Bogota and Corina Pons in Caracas. Editing by Alexandra Ulmer and Kieran Murray.