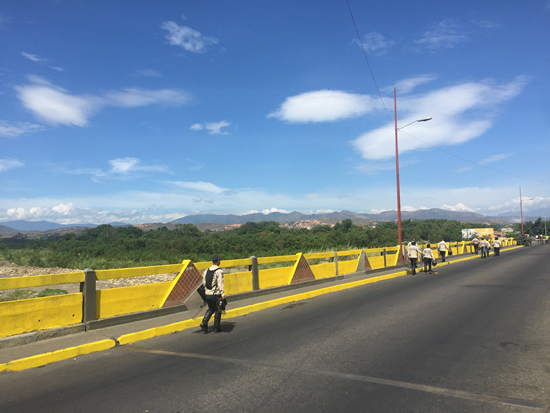 The border bridge is usually choked with motorbikes and U.S. gas guzzling cars, leading into loud and grimy streets where traders hawk wares but smugglers hide theirs.

Yet San Antonio, on Venezuela's border with Colombia, is this week a ghost town. Armed soldiers stand on corners, many businesses are shuttered and the streets are near empty.

The city's reliance on Colombia is starkly evident after Venezuela closed the border here last week and began deporting hundreds of Colombians, as part of measures the government says are designed to control smuggling and paramilitary activity.

Opponents say Venezuela's socialist leader Nicolas Maduro has concocted a border dispute to distract people from a steep economic downturn in the run-up to parliamentary elections.

"I haven't opened my cash register for a week," said Carolina Leon, 28, whose family has owned a shop selling handbags and clothes for 15 years.

"There's no business here, nothing," she said, adding her products were often purchased by Colombians rather than locals who do not have enough money.

Leon, a Venezuelan who has a Colombian husband across the border she has not seen since the frontier was shut, said she was reopening her store because of a threat from the state governor.

"We will break the chains and padlocks of any shops that aren't open," said Jose Vielma, the pro-government governor of Tachira state on Tuesday.

For many years, Venezuela stood as the rich neighbor to a poorer Colombia and a haven for Colombians fleeing a decades-long guerrilla conflict. More than 5 million Colombians live here.

So Maduro is smarting at accusations of abuses against the deportees and says only criminals are being targeted.

Reuters reporters have this week seen hundreds of people fleeing, carrying all they can on their backs across a river. Many said they were legal residents being unfairly targeted.

With Venezuela suffering soaring prices, shortages of basics and unchecked crime, critics say the border crisis is a smokescreen.

"Maduro has unleashed persecution against Colombians in order to divert attention from the profound crisis," said opposition congressman Walter Marquez, in one of San Antonio's few open cafes.

Smugglers had, though, been buying up price-controlled goods—especially gasoline costing just a few U.S. cents a tank—to resell across the border, making huge profits but exacerbating shortages. By closing the border, the government said that on Monday gas stations in Tachira state sold a million less liters (265,000 gallons) of fuel.