Follow the main road, count three traffic lights, and take a left at the third. You'll find a security post there.

"It's a white-and-blue house, the entrance is through the car park," added the email instructions. "Don't tell the guards you are coming to 'Ciboulette Prive', but on a private visit."

As with living-room restaurants that flourished in Havana in the 1990s after the fall of its Soviet benefactor, Caracas is seeing a rise in clandestine dining as inventive restaurateurs seek ways to survive economic crisis, corruption and crime.

Chefs and owners complain that operating a normal restaurant profitably has become increasingly problematic as state controls limit price increases despite roaring inflation and bribery is the only way to get permits in a timely fashion.

Furthermore, crime has made diners seek ever-more private and secure settings, while shortages of ingredients make it difficult to maintain a steady menu.

"No one knows where we are until we tell them. This is an illegal restaurant," acknowledged Ana, the 24-year-old head chef at Ciboulette Prive, or 'Private Chive' in English, set in her cousin's back garden in a wealthy Caracas neighborhood. She asked that her surname not be published for fear of reprisal.

The elegantly-decorated Ciboulette Prive, which opened in October, serves 16 people under a mango tree with retro artwork on the garden wall and vintage vinyl records as place mats.

It charges 3,000 bolivars per person. That's around $7 at the black market exchange rate or $475 at Venezuela's strongest official exchange.

The bolivar amount is nearly two weeks of work at minimum wage, out of reach for average Venezuelans who have no access to dollars and for whom even simple meals out can be a distant memory.

Many now instead spend hours lining up under the hot Caribbean sun for basics like flour, chicken or milk.

"Venezuela must be one of the hardest places to do gastronomy," said the restaurant's owner, 21-year-old Emiliano, who studies business administration at Caracas' Metropolitan University. He also asked that his surname not be published.

Around half a dozen small illegal eateries have sprung up around the city over the last year, mainly publicized through word of mouth, phone calls with owners, and social media.

They are becoming popular with wealthy Venezuelans and foreigners, keen to try new food, jump on the latest trend, or escape from the well-known circuit of high-end restaurants.

"The chefs often take more creative risks so you get fancy mousses and foams, long-braised meats and fruits and vegetables that are harder to find," said one western diplomat who frequents the illegal restaurants, asking not to be named.

Venezuelan government officials did not respond to requests for comment. However, chefs and restaurant-owners said officials tolerate their outlets and sometimes even eat there.

On a recent day, he had just bought beef for 1,660 bolivars per kilo that six months ago cost 600. Such a rise is typical in Venezuela, where official annual inflation was 69 percent last year and is estimated to be heading for triple figures in 2015.

Venezuelan diners, across all outlets, are used to seeing menus covered in scribbles as prices update frequently or asking the waiter what they actually have before even looking at the menu.

Some of the home-based restaurants charge in U.S. dollars, breaking local laws but following a trend in which foreign currency - or their equivalent black market value - is increasingly the basis of transactions.

He is the father of clandestine dining in Venezuela.

"Nine years ago, I realized the situation here would drastically worsen," he said, sat on the tropical plant-filled outdoor terrace of his colonial-style house which doubles as a restaurant.

Moreno charges $55, in U.S. dollars, per person, preferably paid by an international bank transfer. Given Venezuela's current climate, that figure is painfully expensive for anyone not earning in foreign currency.

It equates to about three months of salary at the minimum wage.

Moreno sends out his menu every week by email to a group of regulars. The food on offer is more exotic than many of Venezuela's restaurants as Moreno makes a point of getting out of the country every few weeks.

"I come back to Venezuela with contraband," he said with a smile. "I'm a smuggler. I bring in food from the rest of the world, from India, France, Indonesia, Spain... long-grain basmati, short-grain basmati, foie gras."

Many of the restaurateurs would prefer to run establishments in the open though see the economic climate as too stifling. "You can't be legal in a country where everything is illegal," said Moreno. 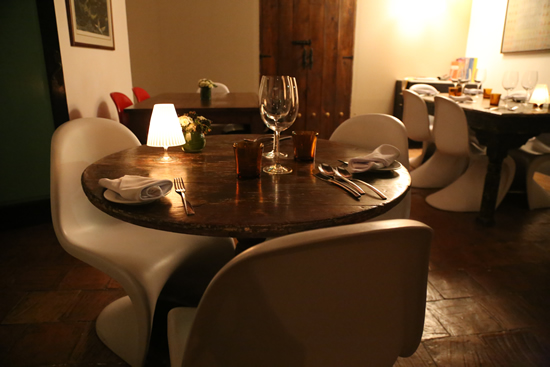