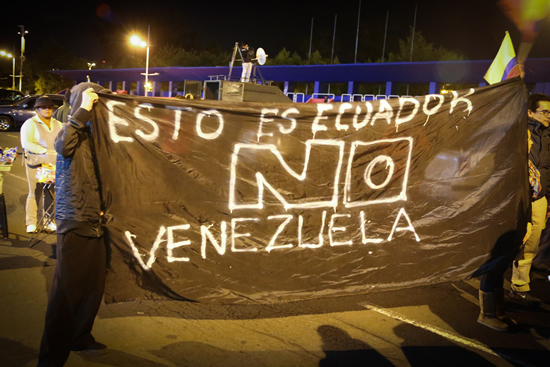 Hundreds of anti-government protesters in Ecuador ended a moratorium during Pope Francis' visit on Thursday and returned to the streets in a rally against recent tax hikes and alleged corruption and autocracy.

Several hundred thousand Ecuadoreans have participated in demonstrations in the past month, mainly in the highland capital Quito and coastal city of Guayaquil, against socialist President Rafael Correa, who accuses them of plotting a coup.

Protesters banged drums, waved flags and chanted "Correa Out" at the headquarters of Correa's political party in a wealthy district of Quito on Thursday evening.

"The government has manipulated democracy, used its power to pursue its enemies and engaged in corruption," said Jorge Penafiel, a 31-year-old lawyer.

Protesters took a break during Francis' four-day visit this week as a show of respect to the pontiff.

Their main targets are increases in capital gains and inheritance taxes, which the government says will only impact the richest sector of the population. Others include Correa's treatment of opponents.

Correa, a 52-year-old economist who came to power in 2007, has been popular among the poor because of welfare policies, paid for from oil revenues, and for bringing stability.

His foes accuse him of being another Latin American "caudillo", or strongman.

He has called the protesters "cowards" representing a wealthy oligarchy - similar to accusations made by his fellow leftist ally, President Nicolas Maduro of Venezuela.

"This is Ecuador, not Venezuela," read one banner at the rally.

Correa's approval ratings have dropped during 2015 from a healthy 60 percent in recent years to around 42 percent, according to leading pollster Cedatos.

Guillermo Lasso, who stood against Correa in 2013, and Jaime Nebot and Mauricio Rodas, the mayors of Guayaquil and Quito respectively, are the main players in a disparate opposition leadership. Support is split between them.

Opposition legislator Andres Paez has pushed himself to the foreground of the demonstrations in Quito but is little known elsewhere in the nation of around 15 million people.

"I'm me. I'm not represented by anyone," insisted protester Alegria Ayala, a 38-year-old English literature teacher.

"Correa has turned me to the right."

Ecuador's next presidential election is due in 2017.

Correa is not allowed to stand for a third term but is backing constitutional reforms that would allow indefinite presidential re-election.