Opposition leader Henrique Capriles, who is championing the push for a vote, was at the front of a crowd blocked by police and National Guard troops when they tried to begin a march to the national election board.

Officers fired several rounds of tear gas and sprayed an unidentified liquid on Capriles and others. Demonstrators chanted "I am hungry" and held up photos of jailed political activists.

"We are not giving up. Our enemy is Maduro. The problem is Maduro, not the National Guard," Capriles said at the scene.

Venezuela's opposition coalition won control of the National Assembly legislature in elections last December, thanks to public ire over a punishing economic crisis, and has vowed to bring down Maduro this year.

But ruling Socialist Party officials say there is now not time this year to organize the referendum, under the complicated norms and steps involved in getting to a vote. They say the opposition should have begun their drive in January instead of April, and included thousands of fraudulent signatures of dead people in an initial collection.

The opposition says a compliant election board, staffed mainly by Maduro loyalists, is deliberately dragging its feet on verifying a first batch of nearly 2 million signatures collected to begin the process.

"The election board is obeying strict orders from President Nicolas Maduro. We want (board president) Tibisay Lucena to see herself as a citizen, not a politician, and see the situation of the country," said one protester Maria Silva, 74.

"The children are dying of hunger and insecurity," Silva added.

Should Maduro, 53, lose a vote and leave office this year, a new presidential election would be held, but were he to exit in 2017, his vice president would take over. That would guarantee continuity for the ruling "Chavismo" movement - named for Maduro's late predecessor Hugo Chavez - for two more years.

As well as the opposition's street campaign, spontaneous demonstrations and looting are becoming more common amid worsening food shortages, frequent power and water cuts, and inflation that is the highest in the world.

Maduro, a former bus driver and long-serving foreign minister who narrowly won election to replace Chavez in 2013, accuses Capriles and other opposition leaders of promoting violence and seeking a coup with the help of the United States. 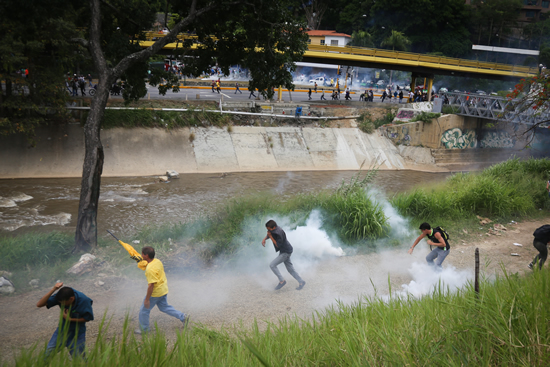